How do you choose to look at circumstances?

Do you see the glass half empty, or half full?

Do you look for the flowers or the weeds?

Can you see a rainbow or look for the clouds? 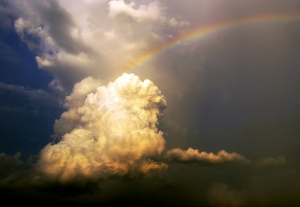 It’s really all a matter of perspective, isn’t it?

Feel free to add your own insight.

My One Year Anniversary with WordPress

WordPress sent me a message stating that it is my One Year Anniversary with them. Hard for me to believe it’s been that long already.

For me, progress has been slow but it has been steady. Not too shabby for someone who has a 40 hour work-week, helps to care for a 103-year old, and write in between!

I will share a few stats from the last 12 months:

My followers know that I have completed an 88,000 word-count manuscript, which I am desiring to publish, currently titled, “Running in Heels – A Memoir of Grit and Grace.” The “experts” say that a newbie (yours truly) should have a writers platform. I started a FaceBook writers page and–one year ago–began blogging about past and current events.

I’ve been especially happy since signing up with WordPress.com for its user friendliness and it being easy to navigate.

From time to time, I do include short excerpts from my manuscript, and to my delight, you readers are wanting and asking for more. This is good!  Since I have started blogging, I have re-connected with friends, acquaintances, and yes, family members from across the miles. I have made many new friends and fellow-bloggers who not only take the time to read, but to leave positive comments and inspiring feedback. This is great!

Bottom line: I feel blessed beyond measure. And I appreciate each and every one of you for visiting my site–new comers and old–and sticking with me throughout this journey to the finish line. My one regret? That I didn’t start blogging sooner.

Feel free to leave a comment about topics that interest you most.

Thank you again for your support and following this blog – from my heart to yours.

We moved to New Jersey when I was six. The term “upper class” didn’t mean us. Neither did the term “middle class.” We didn’t move up in the world, but we did move way down. Down into a hellhole. At least that’s what Mama often said. Our residence: a drafty basement, at the bottom of a five-story building. Pipes covered the walls and ceiling; we even had a boiler room.

Hoboken seemed to beckon my step-dad, Jimmy, for its bar on every corner. A stand-up bar nearby served steamed clams, the shells tossed onto sawdust-covered floors. Those delicacies accompanied a tall glass of beer. Known for being a man’s tavern, women and children were unwelcome. Yet, as I remained by Jimmy’s side, no one appeared to mind. He gave me my first sample of clams, a bit salty but tasty.

In those bars, women and children sat in the back, the front reserved for the men at the counter on stools. While Mama and I waited for Jimmy to satisfy his thirst, he ignored us while throwing down drink after drink, joking with the fellows around him.

“That louse,” Mama mumbled, drumming her fingers on the table, glaring at him from across the room.

The jukebox played my parents’ favorite songs one after another: Frank Sinatra’s Strangers in the Night, Eddy Arnold’s I Can’t Stop Loving You, and Nat King Cole’s Rambling Rose. Jimmy waved his hands as he sang along but never in tune.

Peanuts were plentiful, the shells scattered about on the floor. I didn’t care for the peanuts. I preferred pickled eggs in the large jar. The bartender brought over a sandwich and chips for Mama and me to share. He placed a bottle of cola in front of me and winked.

“Mama, why does the bread have seeds in it?” I asked, sniffing it after the man left.

I took a bite but couldn’t swallow. I grabbed my soda and knocked it over.

“Oh, for heaven sakes, wipe that up,” Mama huffed and reached for my plate, still eyeballing Jimmy. “I’ll eat this if you’re just going to play with it.”

My step-dad’s singing and laughter echoed across Hudson River to Manhattan. Mama’s eyes narrowed, her face turning red. “I oughta go over there, smack him in the face and take his money.”

She was mad enough to do it too. But Mama being co-dependent, tolerated Jimmy’s out of control behavior. Despite my young age, she griped and complained to me but seldom knew what to do. I listened while my mama rambled, until I’d fall asleep at the table with my head on my forearms.

Mama never cooked. Jimmy knew how to throw anything together and make it edible. I even saw him once gather fistfuls of snow to make a pot of rice because we lacked running water. One time he even threw out a quick cooking lesson to leave me to prepare a meal.

“Break the spaghetti in half,” Jimmy began his instructions. “Put it in the pot after the water boils,” he continued. “Then drain it like so . . .” He deftly held the empty pot with lid over the sink . . .

I wondered how I might lift that heavy pot to drain the water and keep a lid over it.

What if the spaghetti spills out all over the floor?

My head swirled with visions of one big mess.

The instructions over, my parents headed out for a nightcap. A few days later, I stayed home alone as Chef Mary to attempt my hand over the stove, kneeling on a chair, trying to remember the difference between a “dab” and a “pinch.”

Sometime later I awoke to voices and the clanking of dishes. It wasn’t unusual for my parents to come home squabbling in the wee hours of the night. Through my sleepiness with my chin resting on my hands, I watched as they devoured my cold pasta creation, unmindful that the noodles were chewy or the sauce soupy.

I beamed with pride before dozing off.

In general, my step-dad was good to me, but Mama often called him a two-faced. I don’t recall when he started hitting her. But I’d hear her crying and saw marks on her jaw.

Jimmy thought himself wise and became philosophical whenever he drank. He routinely came home in the middle of night, long-winded. After he flipped on every light-switch and opened all the windows, he cranked up the radio, blubbering to songs like Winchester Cathedral.

Once I was awake, Jimmy often called on me to listen to him rant and rave about everything and nothing. He’d sit on the windowsill, peered up toward the sky and rambled over mumbo jumbo stuff about the heaven, the moon, and the stars. He repeated adages like:

“Never let your right hand know what your left hand is doing.”

“No two leafs on a tree are alike.”

I never wanted to miss a word but couldn’t keep from yawning. I tried staying alert, but my eyelids grew heavy, my mind foggy as Jimmy’s voice faded in and out:

(A short excerpt from Running in Heels)

Ode to a Mother’s Heart

There’ve been much written about the making of “Son of God,” and those behind the scenes producing it.  Without getting into all that, I will share what moved me in watching this movie.

I felt the significance when Jesus put His hand out towards Barabbas and stopped him dead in his tracks. I can’t say that I’ve ever been touched by an angel before, but I do believe that I have been touched by the Hand of God in my lifetime. Enough to stop me in my tracks. Make me look heavenward. And to examine myself.

I focused on Mary, and what she must have felt in all she’d gone through. She knew her son had a purpose and a mission to fulfill. Yet, she couldn’t have known the price it would take, and all that she would witness along the way. How does a mother not yearn for her child to be safe? Not weep when they are hurt? Not grieve when they are lost? A mother will always want to protect her child from pain, wipe the tears, bare the blows, and heal the wounds. Even when they’re adults.

I cried when Mary reached out to Jesus, wanting, needing, and yearning to hold Him close. Yet she could not. It was not meant to be. His time had come. And she knew like she’d never known before as she watched Him embracing the cross.

I marveled at how her resolve strengthened, accepting the will of God regarding Jesus all the way to the cross. I imagined how hard that was for a mother to do. My favorite scene in this movie was Mary touching Jesus, the cross in between them, both are upholding it. Not necessarily that Mary had anything to do with His mission, but that she embraced God’s plan for His life. And death.

Letting go is not always easy, but it is necessary.

In this world we all have our crosses to bear. Jesus said, “Whoever does not carry his own cross and come after Me cannot be My disciple.” Luke 14:27.  Not an easy feat. The cross is heavy, but it never outweighs His grace. I’m so thankful for the cross and for God making all things new.

Mothers, embrace your children today, and don’t ever stop praying for them.