Women have strengths that amaze men.
They bear hardships and they carry burdens,
but they hold happiness, love and joy.

They fight for what they believe in..
They stand up to injustice.
They don’t take “no” for an answer
when they believe there is a better solution.

They go without so their family can have.
They go to the doctor with a frightened friend.
They love unconditionally.
They cry when their children excel
and cheer when their friends get awards.

They are happy when they hear about
a birth or a wedding.
Their hearts break when a friend dies.
They grieve at the loss of a family member,
yet they are strong when they
think there is no strength left.

They know that a hug and a kiss
can heal a broken heart.
Women come in all shapes, sizes and colors.
They’ll drive, fly, walk, run or e-mail you
to show how much they care about you.

The heart of a woman is what
makes the world keep turning.
They bring joy, hope and love.
They have compassion and ideas.
They give moral support to their
family and friends.

Women have vital things to say
and everything to give.

HOWEVER, IF THERE IS ONE FLAW IN WOMEN,
…THEY FORGET THEIR WORTH.

Proverbs 14:1: Every wise woman builds her house: but the foolish plucks it down with her hands.

“The moment I started it, I had echoes of ‘The Glass Castle’. This is recommended for anyone who loved Walls’ memoirs, as they have some strong parallels.” – Kath Cross (blogger).

It was just a harmless prank, that’s all it was.

And it wasn’t as if Old Lady Hayes didn’t deserve it. The way she used to scream at us for “borrowing” a few of her precious raspberries each summer, like we were stealing gold out of Fort Knox … well, she had it coming.

At least, that’s the way we saw it as George finished tying the string to the red, heart-shaped box. We giggled as Ron added the final touch: two plastic red roses, glued to the lid. “I wonder what will surprise her most,” I asked as George practiced jerking the box out of reach by yanking on the string. “Seeing a box of candy on her step, or watching it fly away when she tries to pick it up?”

We laughed as we watched George make Albert chase the box around the garage. For a chubby 10-year-old, Albert did a good imitation of Mrs. Hayes’s hunched hobble and her seemingly permanent scowl. And we howled when he picked up a broom and pretended to ride it through the midwinter air while shouting, “I’m Old Lady Hayes, the driedest-up old prune in the West!”

Ron was first to notice my dad in the doorway. Within seconds, Ron’s anxiety was shared by all but Albert, who continued to swoop around the garage until he came face-to-belt-buckle with our silent observer. For a moment the only movement in the room came from the little puffs of steam escaping our mouths. Dad broke the stillness by walking slowly to the empty candy box lying on the floor. He picked it up and dangled it by the string, watching it swing back and forth. Then he looked into the eyes of the frightened boys. And, as was his custom, he looked into their hearts as well.

“It doesn’t seem so long ago that I was pulling Valentine’s Day pranks,” he said as he laid the box on a workbench. “One year my cousins and I decided to pull one on our Grandma Walker even though we loved her — she was the sweetest grandma a boy could have. We were just feeling devilish and decided to have some fun at her expense.

“Early in the evening we snuck up to her doorstep with a can of red paint. Grandma was hard of hearing, so we didn’t have to worry about being very quiet. Which was a good thing, because every time we thought about how funny it was going to be to see Grandma try to pick up a valentine that was just painted on her doorstep, we couldn’t keep from laughing.

“It didn’t take long, and it wasn’t very artistic. But for an old woman with bad eyes, it would do. We kicked the door and hid behind bushes. When Grandma finally appeared she stood in the doorway, her gray hair pulled back tightly into her usual bun, wiping her hands on her usual apron. She must have heard the commotion in the bushes because she looked in our direction and spoke loudly enough for us to hear: ‘Who could be knocking at my door?’ Then she looked down. Even from 15 feet away we could see the joy in her eyes when she spotted a splash of red at her feet.

“‘A valentine for Grandma!’ she exclaimed. ‘And I thought I’d be forgotten again this year!’

“She tried to retrieve her prize. This was the moment we had been waiting for, but somehow it wasn’t as much fun as we expected. Grandma groped at the fresh paint for a moment. Slowly, she figured out our prank. She tried to smile. Then, with as much dignity as she could muster, she turned and walked back into her house, absently wiping red paint on her clean, white apron.”

Dad paused, and for the first time I noticed that his eyes were moist. He took a deep breath. “Grandma died later that year,” he said. “I never had another chance to give her a real valentine.”

He took the box from the bench and handed it to me. Then he turned and left the garage.

Later that night a red, heart-shaped box with two plastic roses on it was placed on Mrs. Hayes’s front doorstep by six giggling boys. We hid behind snow-covered bushes to see how she would react to receiving a full pound of candy and nuts.

With no strings attached. 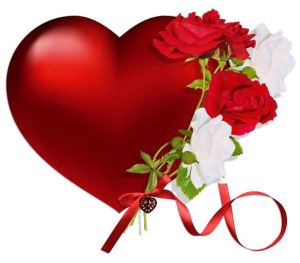 Rise to the Occasion

Bucket list. I imagined I would. Some day. Always wanted to. But never really thought I’d actually go through with it.

My posse and me

I’ve been away on a mini-vacation, a road trip to San Marcus and to San Antonio. Not only did I go, but I went on this excursion with some great gal friends of mine. Overall, it was an exhilarating ride!

I learned a few things on this trip.

I learned that if you put your mind to a thing, you can fulfill a task (if you plan ahead). I learned that schedules don’t always go according to your plans. You may come across a few bumps and potholes along the way, and the winding roads of life may take a bit longer to get to your destination. And I learned that I don’t always do well during these obstacles. (Ahem.)

You see, my expectations may be to do thus and so, and once my mind is made up, I am in a wee bit hurry in getting there. But I also learned that it’s best to stop and smell the roses and make every second count. Because if you don’t, then you’ll regret that you didn’t do better when you easily could have. I learned (and I sometimes forget) to choose my battles and not all hiccups mean the end of the world! I learned that making each moment count are what makes every memory cherished. I learned that as much as I have strengths, I still have weaknesses that need work. Egads! I learned that growing older doesn’t necessarily mean you stop learning. I learned that no matter what, there is always something to be grateful for. And I learn (sort of already knew) that I have the bestest of friends! We love and accept one another–flaws and all–and if feeling down, we lift the other up!

So what did we do, you ask? You mean besides the driving, shopping, dining, visiting my in-laws, and shopping some more?

We went Up, Up and Away in My Beautiful Balloon!

Now those who know me know that I have acrophobia (not to be confused with arachnophobia, which I also happen to be but that’s another topic). Yes, ladies and gentlemen, I have a fear of heights. Or is it a fear of falling? Either way, I tend to get the heebie-jeebies. I discovered I wasn’t the only one among us who was set on facing this fear. And so face it we did; we rose to the occasion. Matter of fact, I was so busy taking photos on my phone, I didn’t have much time to allow that nervousness to take over!

Before take off, once the pilot said to hop in, we (about fifteen total in all) scrambled up inside that basket (with a little assistance from the crew), howbeit somewhat clumsily with one of our legs unable to lower from the ledge of the basket down in our tight space. So much for dignity.

To Deborah, Judy and my new friend, LeAnn: Thanks for the memories. What’s next?

For your enjoyment, here are a few photos of our adventure. 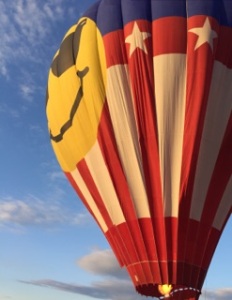 Just about ready for take off.

All for one and one for all! 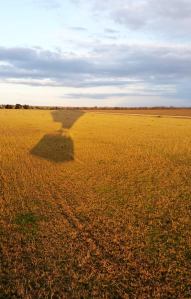 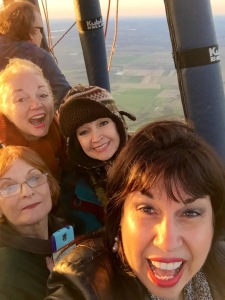 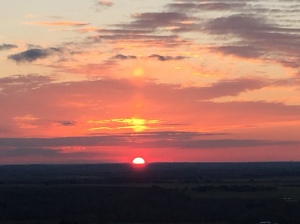 Your life is like a balloon…if you never let yourself go, you will never know how far you can rise.