Into my pre-teen years—although I tried to hide my true feelings—I became self-conscious that developed into a guarded inferiority complex. While not shy as my mother had been, I felt like an outcast: I came from a broken home, my family was poor, and I was still on the school’s free lunch program. My clothes were hand-me-downs. We didn’t own a car. I didn’t even own a bike, although I always wanted one. We didn’t go on vacations like to Disney World the other kids bragged about, nor could we afford the latest trends or luxuries as others.

As I wrestled with these feelings of mediocrity, I became ashamed of my Puerto Rican heritage. I didn’t play the blame-game, but felt second-rate, forever on the outside looking in. I determined not to let anyone see through my brittle exterior to see a weakling. In school, because I didn’t feel part of the “in” crowd, I enviously watched as the popular kids were voted for class president, vice-president, or secretary. In my mind, I believed the ritzy kids went to summer camps, swimming lessons, and Girl Scout meetings. After all, they paid for their school lunches, not the state. They wore the latest fashions, not hand-me-downs. Their straight pearly whites glistened when they smiled. They even pronounced their words perfectly. They lived in big houses whose parents had “nest eggs.”

“Some are more privileged than others,” Grandma explained to me. “But we are all the same in God’s eyes.”

I wasn’t about to argue with Grandma’s statement. All I knew was that there never seemed to be enough funds to do anything extra. My grandparents were extremely frugal. They didn’t believe in splurging or in keeping up with the Joneses.

In the early seventies, several public schools were still racially unbalanced, so the federal courts stepped in. Miami’s school districts bused students from one neighborhood to another to achieve integration.

Because I was Puerto Rican descent, I was the target of their taunting. “You spic English?” they scoffed, using their favorite line. They even gave me grief about my naturally full-sized lips (something others now pay money to have done).

To make matters worse for me, my grandma—unpretentious and a bit old-fashioned— insisted I wear dresses to school past my knees, even though other girls wore the trendy mini-skirts and mini-dresses. Almost all my clothes were second-hand, and at eleven years old—going on twelve—that bothered me.

“Grandma, this isn’t what the girls wear nowadays!” I groaned.

“Dis is what you’re wearin’, and you shouldn’t be ashamed. Your clothes are clean and pressed,” she said with finality in her usual accent.

I threw up my hands. “Grandma, you’re gonna make me get into fights!”

“You are a Christian girl,” she retorted, her eyes wide and fierce. “Dun you forget that.”

Thanks to you, Grandma, I haven’t forgotten.

I’ll always remember my beloved grandma who passed away in the eighties, whose birthday would have been July 26th . In her simplicity, she impacted my life and instilled in me values and principles I shall never forget. 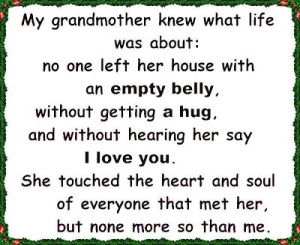 I think I'm getting addicted to comments. Please feed the addict & leave a reply. Cancel reply