She Hurts No More …

A horrific day for our country. In shock, I watched the Space
Shuttle Challenger break apart and burn just seconds into its
flight. Five men and two women tragically lost their lives for
the good of all humanity. They lived their dream by serving
others. I may not have known them personally, but they died
as heroes.

Three months later, on April 3, 1986, sickness reduced an
eighty-six-year-old unsung Puerto Rican woman to skin
and bones as she lost her bout with cancer. She wasn’t affluent.
Refined. Or famous. But she was loved. Adored. And my
heroine.

When Mama called me and told me about Grandma’s final
moments, sobs stuck in my throat. She expressed how she
had sat at my grandma’s bedside, terrified, while listening to
her breathing in short, laborious rasps.

“Your grandma’s parting words were, ‘God is calling me
now,’ and then she gazed up at the ceiling.” Mama spoke dolefully.
“So, I asked her, ‘How do you know?’ But she didn’t
speak anymore. She closed her eyes and I held her close.”

Mama’s trembling voice was broken by sobs. “I . . . told her
that I loved her. And I said to her, ‘you carried me for
nine months.’”

I pictured that heart-rending image of Grandma’s gentle
countenance and Mama struggling to convey her love to her.
And I thought, Oh Mama, she carried you longer than nine
months. My insides ached, knowing that in her heart and
prayers, Grandma carried us all.

My grief came in waves. Looking back, I know God spared
me from becoming hopelessly morbid and consumed with
anguish. Grandma wouldn’t have wanted that. Knowing she
no longer suffered, I believed her final heartbeat didn’t mean
the end but the beginning!

I wanted to celebrate her life when I journeyed back to
help with her memorial.

Once a plump woman, Grandma had lost so much weight
in her final days. She had always loved a simple white Easter
dress that belonged to me and requested that when the time
came we’d bury her in it. My dress fitted her perfectly then. I
also asked that everyone wear white instead of the customary
black garments at her funeral.

White carnations—Grandma’s favorite—covered her
opened casket. I stood, my eyes caressing her still face, now
so thin. Vivid images of her life jumped in my thoughts. I
saw her on her knees pleading to God to be merciful to her
loved ones. I recalled her many prayers of gratitude for another
day. I pictured her lips mouthing words as she read her
Bible, with her index finger pointing to the sentences across
the worn pages. I could still hear the sound of her soft voice
calling my name. I remembered the merriment of her laughter
after listening to one of my silly jokes.

Hot tears blinded me and I couldn’t blink them away.
In my mind’s eye, Grandma came to me. I could hear her.
Feel her. Touch her. Her love, her hugs, her kisses embraced me.

We honored her memory and her passing from this life
into the next.

A gentle breeze blew the heat of day; the sun hid behind
the clouds. The scent of rain permeated the air.
As it started to drizzle, my heart comforted. Grandma always
considered it a good omen if it rained on the day someone
laid to rest.

Before long, her coffin lay in a crypt next to her cherished
husband, my grandpa.

At last, Grandma’s labors had ended. Thank God, she
hurt no more.

(Excerpt from Chap. 37 “Running in Heels: A Memoir of Grit and Grace” by Mary A. Pérez)

Footnote: Dear Readers, on this Mother’s Day coming up, gone from us for more than three decades, I remember my precious grandma who I mentioned in my book. Matter of fact, both Mama and I miss her terribly. Grandma was the undisputed, caring matriarch of our familia; a ray of sunshine in our entire existence. She rarely complained or thought about herself. She was a selfless soul, showering love and kindness to others. Impeccable in my eyes, she truly was our unsung hero. We cherish her memories.

Filed under heroine, Running in Heels: A Memoir of Grit and Grace

When she looks back on her life, she sees a faded memory of a girl unsure about herself, frighten, lost, and insecure. She can’t help but to see sheer pain, disappointments, mistakes and heartaches.

She thinks about the roads she’s traveled: Roads filled with quick sand like the dry Sahara desert and potholes the size of Texas that tried to swallow her whole!

She thinks about the battles she’s fought for her marriage, her sanity, and her four small children:

She thinks about the struggles she’s endured from abandonment as a child and then again as an adult, along with the failures, and the low self-esteem:

She thinks about the sacrifices she’s made in walking away from an education, the letting go of a special-needs child for the child’s best interest, and in putting her dreams on hold,

She thinks about the love she’s lost in saying goodbye to her baby sister, her beloved grandparents, and her 15 years of marriage:

She thinks about the tears she’s shed in her loneliness, with emptied promises, shame and pain:

But as she looks back on her life, she also sees the lessons that she’s learned:

She sees a girl …

Not one who scratched and clawed her way to the top. But a girl who had just enough grit to float to prevent from sinking when life tried to weigh her down. Who walked on pebbles and used them as her stepping-stones to get to higher ground. Who’s childlike faith in the God above would blossom into something much greater than herself. While she may have had a father figure missing in action, she’d come to know her Heavenly Father who never left her side.

When she looks in the mirror and what does she see? 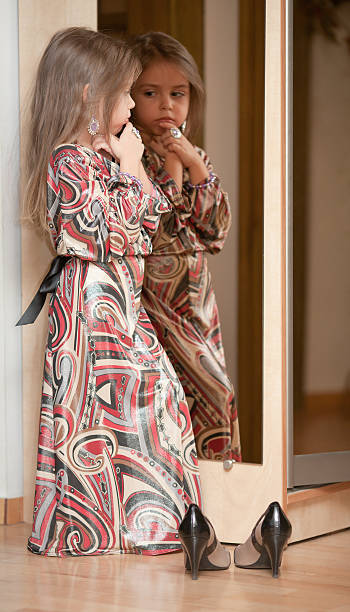 A girl once dejected and rejected. She no longer is that sad, little girl. So don’t you feel sorry for her. Applaud her, because it was during the dry seasons that she discovered an oasis. Rejoice with her, because in the darkness is where she found a beacon of light. Admire her for rising above her crisis in spite of her circumstances.

She may have started out in the valley, pecking along like a chicken digging for worms. But then the Ancient of Days taught her to spread her wings like an eagle, and soar into the heavens over the mountaintop.

Don’t cry for her, feel sad for her, or grieve for her.

Her past may even want to dictate her future, the voices in her head play a broken song, her name may even mean “bitter” — but she refuses to be that girl anymore.

What kind of girl is she?

She is stronger today for everything she endured. Her scars serve to remind her that she is a survivor. She appreciates the beauty of living life one day at a time. She surrounds herself by those who encourage and genuinely care for her. She clothes herself with a garment of praise, amazed by the wonders of God’s grace.

When she looks in the mirror, what does she see?

She sees a girl turned woman.

She is more than a conqueror.

She sees strength, learned lessons, and pride in herself.

Not that girl anymore.